I made this cute bento this morning – Pucca & Garu.  My sons love to watch this animated cartoon.

Pucca is a flash animated series by the South Korean company Vooz Character Systems. Pucca first originated as a series of online flash episodes and it now airs on Toon Disney as part of Jetix.

Pucca is the young daughter of a Chinese noodle house (Go-Rong Restaurant in the middle of Sooga, an Oriental village that looks decidedly medieval, and yet has modern accoutrements like electricity and plumbing.) owner and she is hopelessly in love with the ninja Garu (a serious ninja who’d rather build his chi than chase girls). Garu tries desperately to avoid Pucca’s advances and usually does not return her affection. This results in many comical situations as Pucca goes to great lengths just to steal a kiss from Garu. Expect to see lots of “funny love” antics involving everything from noodles to deadly ninjas.

Okay, back to the bento…I used Gardenia Butterscotch bread with Nutella hazelnut spread to make the sandwich. I didn’t cut off the bread crust as the sandwich just fitted nicely in the box. To make the Pucca and Garu, I cut the hard-boiled egg into half, then decorated the face details with the nori and artificial crab stick. After that, I used some nori to make spiky looking pony-tails for Garu’s hair, and using 2 blueberries as Pucca’s hair buns. The red color ribbons are tiny stripes from red color part of the artificial crab stick. There are chicken nuggets and blueberries in the bento too.

I am using a new bento box that I bought form Jusco yesterday. This is a charming blue box with Micky, Minnie & Pluto printed on the lid. We love the box so much. 🙂 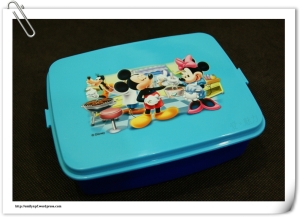 I am going to link this post at What’s for Lunch Wednesday, Week 14 at Shannon’s blog. Click on the link to check others’ bento too. 🙂

Today is Thursday agian, another one day before the school holidays start. Oh…so good, holidays are coming…can take some good rest during the holidays…hohohoho… :p

This entry was posted on Thursday, September 2nd, 2010 at 7:53 am and is filed under 爱。开心便当 Bento. You can follow any responses to this entry through the RSS 2.0 feed. You can leave a response, or trackback from your own site.